These days there’s pressure put on smokers to give up; there’s legislation coming out reasonably regularly to limit exposure to smoke; there’s limits on where you can / can’t smoke and gruesome warnings and images on tobacco products showing just how harmful smoking can be. Things have most definitely changed…

Tobacco was first introduced to Europe by explorers returning from the New World, in the UK that is famously noted as being Sir Walter Raleigh. Smoking was, until relatively recently, considered to be perfectly acceptable. It’s negative impact on health not being really understood until after the Second World War.

In Europe the use of smoke – in the form of things such as Incense, had long been used for a variety of reasons. Tobacco smoke simply offered a new form of smoke to use. Thomas Sydenham, in 1686, recorded his observations of the use of tobacco smoke:

Here, therefore, I conceive it most proper to bleed first in the arm, and an hour or two afterwards to throw up a strong purging glyster; and I know of none so strong and effectual as the smoke of tobacco, forced up through a large bladder into the bowels by an inverted pipe, which may be repeated after a short interval, if the former, by giving a stool, does not open a passage downwards.

For those of you who don’t quite understand what Sydenham is describing here it is in simple bullet points:

Sounds fairly peculiar doesn’t it? But it’s a practise that continued for quite some time. In 1745 a physician called Richard Mead wrote about the use of a Tobacco Enema as a means of resuscitating someone who had drowned. An enema is as Sydenham described; an insertion into the rectal passage, most commonly designed to open the bowels but in this case designed to save a life.

He wasn’t alone in believing this. The Royal Humane Society joined in and installed resuscitation kits along the banks of the River Thames in London. Much alike us placing life saving equipment and floats etc alongside riverbanks and swimming pools today. The difference being that The Humane Society included Tobacco Enema’s in their life saving kits.

At around about the same time, similar was being done in France. This is a description of a wife being saved through use of a Tobacco enema:

She was instantly drawn out, and laid on the shore; when (while the Standers-by were giving their Advice, some to hang her up by the Heels, and other proposing various Methods,) a Soldier going by and being told what was the Matter, desired the Husband to comfort himself, for that his Wife should soon come to Life; then, giving him his Pipe, bid him to put the End into her Anus, and blow the Smoke up with all his Might, putting the Bowl of the Pipe covered with a pricked Paper into his Mouth, the fifth Puff made the Woman’s Belly grumble very loud, she threw up some Water, and then recovering her Senses she sat up an End. Source I09.com 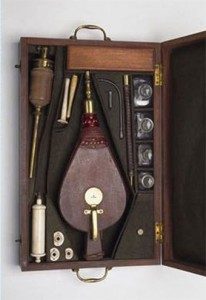 A Smoke Enema Kit such as the one pictured above continued to be in use well into the 19th century. In 1811 the toxic properties of Nicotine were discovered: that didn’t stop Smoke being blown up bottoms for decades to come though!